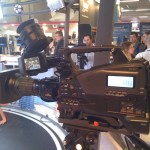 After Sony teased the whole world with an earth-shattering announcement, it was high time to join the party at the Siel & Satis 2009 Trade Show in Paris and ask the question of all questions:

What is “industry-shaking” in all this?

Get the answer and more after the break with a Q&A report about the new PMW-EX1R and PMW-350, and also a short test of a fascinating device by JVC which converts 2D video to 3D – in real time, please.

Q: We have all read the spec sheets and brochures available for download right on the day of the announcement [press release, PMW-EX1R product page: US / EU, PMW-350: US / EU, and a sponsored hands-on test]. As per the “industry-shaking” teaser, the audience was a little bit… well, underwhelmed. The name PMW-EX1R let us think this camcorder could be using a new EXMOR R sensor (for improved sensitivity and S/N ratio), and actually it does not?

A: The PMW-EX1R is an evolution of the PMW-EX1 (which it replaces). The main improvements include:

Q: So it is about the PMW-350 then? In a nutshell, what is the compelling value proposition brought forth by this new camcorder?

A: PMW-350 brings all the features and benefits of memory-based solid-state recording to a full-featured shoulder-mount 2/3-in HD broadcast camcorder, that you can complement with the usual range of accessories (upward-compatible battery packs, RF transmitter…)

Q: What is the target market segment, who is it for? From the specs and form factor, it seems like a refreshed design taking inspiration from the PDW-F355 XDCAM HD, replacing Professional Disc with memory cards and taking the transition to CMOS. Is it again about extending XDCAM HD features to (slightly) more accessible segments? (*)

A: No, these are different – for instance regarding weight (**). Actually the PMW-350 is targeted at users of DVCAM shoulder-mounts (for ex. the DSR-570 series), to help them make the transition to HD. Solid-state recording with CMOS means lower power consumption and lower weight: although PMW-350 fits a variety of situations, the ideal scenario is ENG (field reporting). Documentary is excellent too, although this creates even stronger requirements (compared to short-lived news) to address the IT archiving challenge (i.e. disk-based archival as opposed to tapes or Professional Discs). And solid-state recording brings additional flexibility in processing footage.

Q: What are the post workflow options (not mentioning the HD-SDI & HDMI live feeds)?

A: There is a wide variety of options. You can extract files from the memory cards with a card reader. Or use hard-disk mobile storage to offload the video from the cards temporarily. Or directly from the camcorder with the USB connection or iLink / Firewire. You can also use Memory Stick cards (without under-/over-cranking capability though).

I had the opportunity to test an amazing device by JVC… This JVC DM-TD10 converter takes a live ‘normal’ HD video feed as an input, and outputs 3D HD video: specialized image processing algorithms are able to separate various focus planes in the video (based on edge recognition, focus, movement) and then create 3D video from the 2D feed.

Here is how the demo was setup:

The main drawback is in losing half vertical resolution, but that was not a show-stopper by any means – the viewing experience was really comfortable… With interlaced video, one could argue that you also lose half temporal resolution, but there was no apparent judder.

So basically this demo was actually showing 2 distinct technologies which are there and available today:

Now, there are still some hurdles to overcome:

Anyway, the demo was smashing.

A nice device which lets you use all 3 hands 4 hands simultaneously to control shadows, mid-tones, highlights, and other parameters, with Apple Color for instance.